The Royal Academy of Dance and the Jack Petchey Foundation created Step Into Dance in 2007 and the program has since reached over fifty thousand young people across London and Essex. Step into Dance is the largest inclusive dance programme in the UK. Our programme reaches over six thousand secondary school students annually, offering regular dance classes and opportunities to get involved in a wider programme of workshops and performances.

The Royal Academy of Dance is a valued partnership of the Foundation, and so as part of our 21st birthday, we wanted to showcase what they do on the Step into Dance programme.

Step into Dance supports the development of dance for young people and in particular, aims to reach those that might not otherwise connect with it. We offer an artistic youth dance programme delivered by professional practitioners and artists, allowing young people to develop skills, experience dance and share ideas to build a life-long passion for the art form.

When leaving the programme, our alumni dancers are encouraged to expand their talent further by exploring training and professional opportunities within the dance sector. Step into Dance alumni go on to achieve wonderful things across the dance and performing arts industry. We are extremely proud to share these success stories from some of our past dancers.

Blue went to Lambeth school, where he was introduced to the Step into Dance programme and Kevin Young (a SID teacher). Kevin had worked his magic and Blue was hooked! He went on to work with the SID Contemporary and Street dance companies for six years performed in prestigious venues all over London. He then went on to study Dance and Education at Kingston College whilst teaching at three schools. He also started his own company together with Kevin that clocked up many trophies and awards for their work and are national champions.

Blue became involved with teaching on the Step into Dance programme and  enjoyed working with his students. Giving back is what it is all about for him and as he says: “I have never felt a better feeling than when one of my young dancers is on the stage, full of expression, full of joy…knowing that someone did that for me when I was young, makes me even more determined to do it for others.” 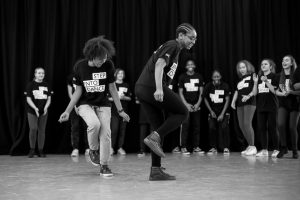 Jamie Flatters is a former Step into Dance dancer, who later found a love for acting, directing and writing. Since leaving the programme, Jamie has appeared in the British television drama Liar (ITV 2017), a Dutch film The Forgotten Battle (2020) and will now be starring in upcoming sequel film Avatar 2/3 (2021/2023).

Having previously worked on experimental short films, Jamie explored the concepts of using ‘Physical Theatre’ techniques on screen, developed from his background as a dancer from training at Step into Dance.

In 2018, Jamie won ‘Best Experimental Short Film’ at the London Independent Film Festival, for his film Good Trouble: What if the suit chokes? 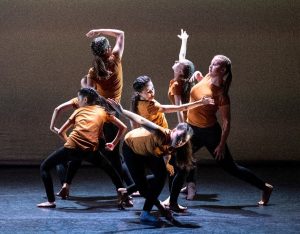 For Ayten’s parents, who are of Turkish origin, the idea of a dance career for their daughter was something they had not imagined. Ayten Joined Step Into Dance at school and was a member of the Youth Company for 5 years, and was a part of both the Contemporary & Street companies. Ayten says “Not only did the training equip me with a strong foundation in a range of dance styles, but it also taught me many key qualities needed in a dance artist such as commitment, professionalism and hard work.

Today, I am a member of Myself UK Dance and BD-Blaq Dance. I have performed internationally with choreographer Christina Dionysopolou, and I am now training with a Hip Hop dance company Far From The Norm, which is led by Olivier Award winner Botis Seva.

I am incredibly grateful for everything I have gained through the Step Into dance programme, I don’t know where I would be today without it.”

Due to a knee injury Nathaniel had to have a year out of training to have an operation. This experience made him aware of how much dance really meant to him. Once recovered and after a few months training, he was granted a full scholarship to train at the Urdang Academy from September 2015.

He has since had the opportunity to perform in music videos for well-known music artists, as well as directing his own which can be found on YouTube –   “and this was all because of  Step into Dance” says Nathaniel.

Mollie Stebbing is an aspiring Contemporary dance artist and a previous member of the Step into Dance Contemporary & Jazz companies. Mollie says “The dance training I received at Step was hugely influential for me. My time there taught me artistry and commitment, among so many other life lessons.

I couldn’t have asked for a better place to start my dance journey. The dance practitioners at Step were a real guiding light for me in gaining the confidence and skill set to pursue a further career in dance”.

Step into Dance, is immensely proud of all our students’ achievements and so many have proven Sir Jack’s motto true – “If you think you can, you can!”