Erin overcame her stutter to win this year’s Speak Out Challenge! 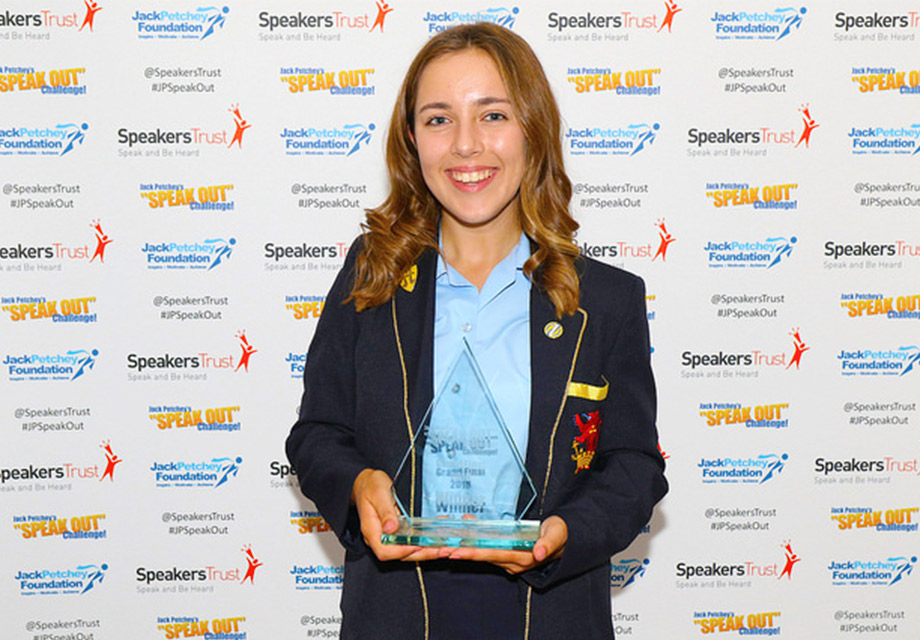 The 22nd of October has seen International Stuttering Awareness day promote recognition for the most common speech impediment in the world, with a striking 1 in 100 people dealing with a stutter at some point in their lives. I am proudly one of those 1 in 100’s, and have had a stutter since I was able to talk. It is an important day for those who have something important to say, though it might take us a little while longer than others.

A stutter, by dictionary definition, is to ‘speak with sudden involuntary pauses and a tendency to repeat the initial letters of words.’ This definition I believe covers the literal side of things, or the theoretical aspect to a stutter. However, stuttering is more than just a stop in a sentence, more than just the repetition of a singular letter, more than just struggling to read out loud. It’s not being able to say ‘hello’. Its classmates giggling as you struggle to say ‘here’ in the register. It’s learning to interchange words you will stutter on to those you won’t in an instant. It’s feeling your cheeks heat up in shame because you can’t finish your sentence and your friend finishes it for you. I started stuttering as soon as I could speak, but began speech therapy aged 6 after I was cast in my school play, having a stutter was something that I simply could not accept as a loud mouthed 6-year-old. I couldn’t understand that the words I had in my head could not make their way to my lips as I thought they should do, I could not understand why my chest felt too tight and my shoulders felt so tense or why my voice spluttered and chipped and dragged when I answered a question in English class. I had 5 years of speech therapy and want to commend today as one that raises awareness for something that otherwise wouldn’t get recognition.

I won the ‘Jack Petchey, Speak Out! Challenge 2018’ with my performance entitled ‘A speech for speech’, which explained how growing up is effected by a stammer. This was the competition to change me forever. I was able to perform, I was able to get up on a stage and do what used to scare me most: speak. And I loved every terrifying second. Because for that time, I could perform without a care and without worry, I could simply get up and tell people my story. Our story. In front of the kindest, most supportive competitors and members of my family that had watched me progress from stuttering out a ‘good morning’ to performing in front of 1000 people, I could voice something that I believe vitally needs to be voiced. The little things that run through every stutterer’s mind. And in that moment, upon that stage, I finally accepted that perhaps stuttering isn’t so terrible. I realised that I want people to remember that if you have a stutter, it doesn’t mean that you can’t get up on a stage and do things. It just means that you have to have guts. I say talk as much as possible. Stutterer’s don’t like talking, but if there is one thing I want to say to someone with a stutter it would be to talk. Talk to your animals, talk to teachers, talk to absolutely everyone who is near you. A lot of it is about practising and overcoming the fact that if you do stutter; it’s not the end of the world, you aren’t less of a person.

Jack Petchey’s “Speak Out” Challenge! supports young people share their views, learn from each other and build communication skills for life. The programme is designed and delivered by Speakers Trust and supported and funded by the Jack Petchey Foundation and runs in almost every state school in London and Essex. To book your free Year 10 workshop today please contact us on jpspeakout@SpeakersTrust.org