I helped to celebrate the Jack Petchey Foundation’s 18th Birthday! 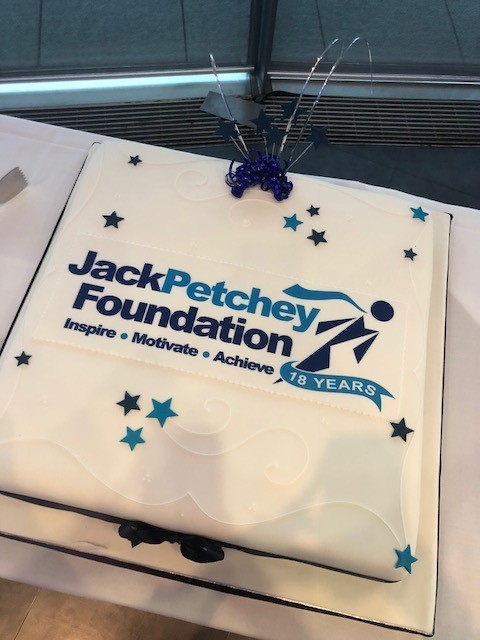 If I’m being totally honest here, I was incredibly excited, but also pretty nervous about attending The Jack Petchey Foundation’s 18th Birthday celebratory event last week. Being invited to such a prestigious occasion was an honour to me, and was most definitely a memory I will never forget.  The event was held on the top floor of City Hall and WOW did it make me feel important… this is somewhere I NEVER thought I would have the opportunity to visit! I especially never expected to actually MEET the man himself…Sir Jack Petchey!

Being 17, this means that I have had very few opportunities (this was my first!) to attend such an important event, and I really didn’t know what to expect. However, I met so many lovely and interesting people; who made me feel extremely welcome and I thoroughly enjoyed chatting with! The event involved numerous stage events and speeches that were performed throughout the night – from a theatre school performance which explained the foundation’s work from when it was founded in 2000, to having the CEO of the foundation give an amazing speech.

Two guest speakers that really inspired me were Camomile Shumba and Joe Pascoe. Although both only 18 years old, they gave incredibly moving speeches that described their experience with the foundation, and how it has changed their lives. They each described how the foundation has helped them grow as young adults, and why it inspired them to become young leaders.

When I was 13, I was actually lucky enough to receive a Jack Petchey Achievement Award. I was a frequent member of Havering Athletics Club, and was nominated for the award by my teammates  due to my commitment to the club and for the enthusiasm I had shown since I had begun training at 10 years old. Receiving my Jack Petchey Achievement Award was a moment from my childhood that I know I will carry with me forever; it helped me to grow as a person by allowing me to realise I had skills I didn’t know I had! My confidence increased, and I was extremely proud of myself, as were my friends and family.

I am so grateful for having the opportunity to attend such a prestigious event that celebrated such an amazing organisation – the fact that I was able to celebrate the Jack Petchey Foundation’s 18th birthday meant so much to me, and I was so excited to have the chance to reconnect with the foundation and their work!