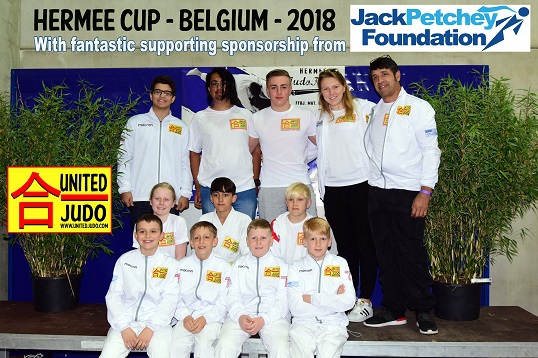 United Judo, a youth judo group from Bexley, travelled to Belgium to take part in a special European tournament- the Hermee Cup. The group applied for a Leader Award Grant from the Jack Petchey Foundation to help towards travel and accommodation costs, which helped to make the trip far more affordable for the young people. Many of the members had never had the chance to compete overseas before so this was an exciting opportunity for them to experience Judo outside of their youth club.

Twelve of the group members flew to Belgium, where they not only represented their club but their country as they were competing against young people from all over Europe. In total , there were around 200 judo players taking part from various countries including Holland, Sweden, Greece and Germany.

On the Saturday morning the under 15s were weighed and put into their groups where they fought against the different teams from across Europe. After competing, they were all invited to a masterclass run by the current World Champion and the European Judo Champion. The under 15s class started with a collective warm up and they were shown different throws and hold downs to use in their fights. The following morning the older members attended the event and were put into groups to experience a similar day.

United Judo members  valued this once in a lifetime experience of competing overseas and meeting fellow international Judo players. They all had a memorable time and look forward to building on the skills they picked up on this trip. Some of the players who are currently doing GCSE PE will also be able to put this trip forward as an achievement for their final mark. Overall, it was an inspiring opportunity for all of the players and one they won’t forget quickly.

One player said: “What an experience training with all these top players!” A parent also commented on the brilliant opportunity, saying: “The support our children get from this club is outstanding, what a fantastic opportunity for them.”