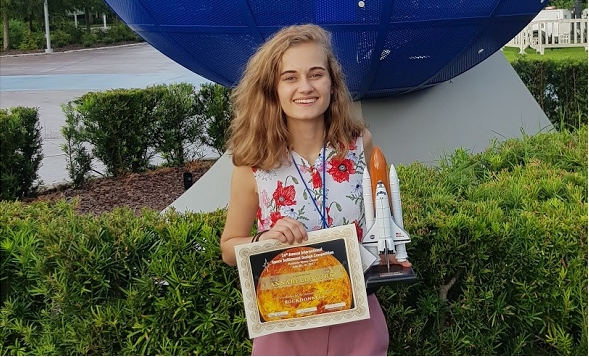 Annabelle York was among a group of outstanding students from across Sutton who received Achievement Awards from the Jack Petchey Foundation earlier this year. She was nominated by her peers after demonstrating hard work and dedication when she was involved in the national final of the UK Space Design competition at Imperial College, London. Since then, Annabelle has travelled halfway across the world to represent Europe in the international competition at the Kennedy Space Centre in Florida!

It all started after Annabelle and her group impressed the judges in the initial regional final at school, which meant they were then invited to compete at the national final of the UK Space Design competition at Imperial College. There, the team of 12 were grouped with three other teams from across the UK. Everyone within the group was assigned specific roles to help split out the responsibility. Annabelle was made the Director of Automation and Robotics Engineering, the department responsible for computer systems, robots and machinery that would be in charge of building the resources used, as well as the technology that would help with everyday life in space.

The competition was tough! Annabelle recalls working hard all day and then retreating to a nearby hotel to continue working into the small hours of the morning. Despite their hard work, Annabelle’s team unfortunately did not win a place in the international final. However, they were told three people out of every unsuccessful team would be offered a place to compete in a separate group named ‘Team EU’. All of the students anonymously nominated members of the group who they felt deserved to be chosen for the new team. Thanks to her dedication and leadership skills, Annabelle was chosen to compete.

In July 2017, Annabelle met with her new team at the airport ready to fly across the world and compete in the international final. Before getting to work, all of the students had the chance to explore the new area and even visited Universal Studios together! After getting to know one another, it was time to get to work. There were teams from across the world and Annabelle’s team was grouped with teams from India, Argentina and US teams to form a group of 60 young space designers.

Annabelle was, once again, made Director of Automation and Robotics Engineering. This time the brief was longer, harder and more challenging than the one in London. The group had to design a settlement strong enough to hold 10,000 people on Venus – where the average surface temperature is around 462°C! The group had two days and nights to complete their design on time. They spent the days working in the Kennedy Space Centre itself and then would work long nights in their hotel room. Unfortunately, Annabelle’s group were not chosen as the winners but she still looks back on the experience with joy and knows that what she has seen and learnt will influence her love of science for years to come. She got the chance to explore the incredible Kennedy Space Centre where she saw the Saturn V rocket, the Atlantis Space shuttle and bought lots of souvenirs from the NASA space shop!

Annabelle says: “It has been a very challenging but immensely rewarding experience. I’ve made some amazing friends and learned an awful lot about the engineering industry, the future of space travel and myself. It’s fuelled my ambition to study engineering and I hope one day to work in the aerospace industry.”