Achievement Award winner Jonas on defining your own potential

We love hearing from our Achievement Award winners: young people being recognised for being the best they can be in whichever field they choose to excel in!

Jonas is no different, and was awarded his Achievement Award this year from Young Actors Company at Theatre Peckham by his peers for being a hard worker with a great attitude. But in this interview, Jonas tells us that wasn’t always the case, and how the motivation of being recognised changed him into the award-winning public speaker and CEO of an inspiring organisation he is today.

Jonas is the CEO and Founder of Ace Your Ambition, an education organisation built to facilitate progress for young people to become the leaders of today and craft lives and habits that they would be proud of, through workshops such as: Goal setting, self-identity, Growth Mindset etc. Jonas work with schools, housing associations and football clubs to give young people the knowledge they need and deserve to know.

“At school, it felt like I was seen as a ‘child that was a nobody’,” he told us. He wasn’t engaged in lessons and didn’t really enjoy school.

His mother told him that she wanted him to attend the award-winning mentoring organisation 100 Black Men of London to meet other men and get some direction in life.

Jonas arrived at that first session with his hood pulled up and avoided eye contact with everyone. He listened to everything the group shared and the activities they did, but he didn’t say a word. Jonas told us he was nervous to speak up in the group, but that he didn’t like how so many people had labelled him “a bad young person”, and he took this as a challenge to prove them wrong. So he came back every week, and in each session he slowly interacted more and more with the activities.

“You can’t allow people to tell you what your potential is. You don’t know what it is yet, so how can they?” He said. 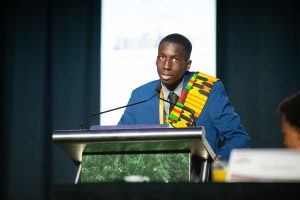 In one session, he heard about an award given out in the programme each week – the Diamond of the Day.

“I wanted that award so bad, so I put in the extra effort. Week after week, putting in a lot of hard work, but I never won Diamond of the Day. And then I found out about the Diamond of the Year – and I thought maybe I should aim for that?”

“When they called my name, everyone was cheering and taking photos. I wasn’t used to that. I wasn’t used to people looking at me like that. I saw the award, with my name on the Diamond. It didn’t feel real.” Said Jonas.

As well as this prestigious award, Jonas was given the chance to go to America with the organisation and deliver a speech to at the 100 Black Men of America conference. At the age of just 17, Jonas was flying out to Vegas for a public speech.

Since then, at the age of 20, Jonas has created his own inspiring organisation, Ace Your Ambition, which aims to educate and empower young people to create a life that they will be proud of.

Winning the Jack Petchey Achievement Award was also something that Jonas strove for to prove himself. “I’d seen the Jack Petchey awards at school, and I’d always wanted one, to be a part of this group of young people who were doing amazing things. I was voted by the other young people at Theatre Peckham – I was shocked that people thought so highly of me. Their main reason was that I made them feel a part of the group, and that was so important to me.” 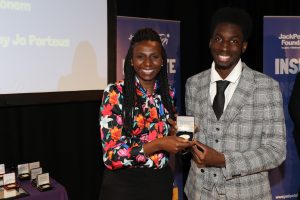 “People always tell me you’re a character, you’ve got personality – and that means more to me than when people say you’re a good speaker. Having good personal skills means you can help people, that you can spread positivity.”

This year, Jonas also had the honour of giving a Ted Talk in Lewisham entitled A Young Man Growing Up Fatherless which he sees as one of his greatest achievements. 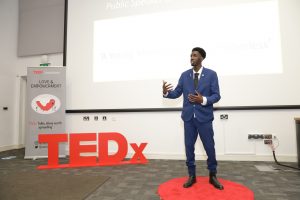 “You’re time is coming. If you stay true to the game and true to yourself, you will get there. People will have perceptions of you, but don’t conform to them. Put in effort to improve yourself every day in every part of your life – family, school, social skills, and life skills… those skills are just as important as professional skills.”

We can’t wait to see what Jonas goes on to do next!

Do you know an Achievement Award winner who has gone on to inspire other young people? Get in touch, we’d love to profile them on our website and celebrate all they have achieved! Email pr@jackpetchey.org.uk to find out more.