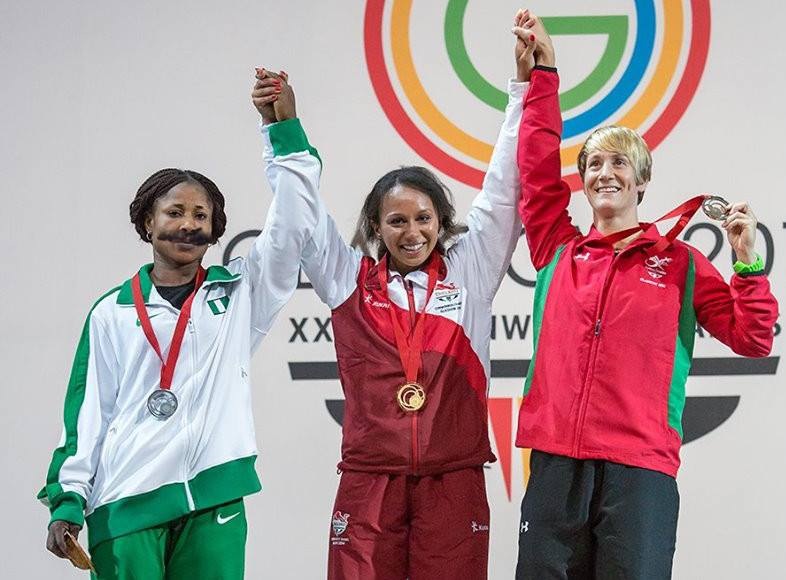 This ‘Today’s Role Models’ feature is about Zoe Smith who received an Achievement Award in 2006. She is now a successful international weightlifter and has achieved absolute mountains, all because of someone giving her the opportunity to try weightlifting at her gymnastics club…

As told by her mother, Niki Dakin.

How old were you when you got your Achievement Award and what were you nominated for?

Zoe was 12 when she received her Jack Petchey Achievement Award. Bexley Europa Weightlifting Club had only recently joined the scheme in 2006, and Zoe was their very first Achievement Award winner. We still have a copy of the citation which gives the reason for her award: “For improving each of her lifts significantly – 10kg each – in only two months” – a massive achievement!

Being so new to the sport of weightlifting Zoe was totally surprised to be nominated for the award, especially as other lifters at the club had been there longer and had therefore made more progress. I know how proud it made her feel, and the recognition really gave her the encouragement to stick to the sport and to continue to try to improve.

How did you get into weightlifting?

Zoe had been a competitive club gymnast for a number of years, and had only recently moved to her new club ‘Europa’ which also had a weightlifting club at its base. One day (out of the blue – or so it seemed at the time) the gymnastics coach asked her if she’d like to go down to try some weightlifting. The coach had said something along the lines of: “Let’s face it, you’ll never make the Olympics as a gymnast – but maybe you’d make a good weightlifter!” Zoe accepted the challenge and never looked back. It turned out that the weightlifting club were looking for a girl to make up the numbers in a two boy/one girl team for the London Youth Games – the only trouble was Zoe was two years too young to take part. 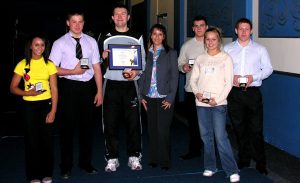 Tell us a bit about your sporting career.

Zoe’s sporting career really did come about by chance, as I’ve just mentioned. If she hadn’t been invited to give weightlifting a try it is definitely not something she’d have ever thought of doing. It is fortunate that as a young girl, she wasn’t intimidated by the noisy, sweaty, male-dominated gym that she walked in to. She was made so welcome and was really lucky that the Head Coach, Andrew Callard, spotted her potential so quickly.

Even though she had only started training with the expectation of joining the Bexley London Youth Games team, as I’ve mentioned she was two years too young to pursue this as they don’t (or at least didn’t at the time) allow weightlifters to compete until age 14.

Instead, her first official competition came in 2007 at age 13 when she took part in the British Under 17s Weightlifting Championships. Zoe won her category and also broke the Under 18s British records for snatch, clean and jerk and total which had stood for 11 years. That event qualified her to compete at the European Youth Championships in Italy – so by only her second competition she was a GB international.

The following year, in 2008, Zoe was invited to travel to the Beijing Olympics as a guest of the British Olympic Association, as part of their British Olympic Ambition programme, which was initiated to give young Olympic hopefuls a taste of what they might expect at the London 2012 Olympic Games. It felt incredible for her to be so young and so new to the sport and to be thought of as a possible candidate for selection at our home Games. She told me that the excitement of being among the Chinese home crowd cheering for their weightlifters really made her hope she might experience the same in just four years’ time – although that still seemed a far-fetched idea! 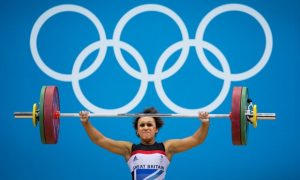 Zoe lifting at the London 2012 Olympics

And then the wheels came off …

Zoe had been more or less assured of her place in the Team GB squad for her second Olympic Games in Rio. All she needed to do was take part in the British Championships. I was in the crowd watching as she came out for her first snatch and then her shoulder ‘went’. Zoe had sustained a bad injury that required surgery and would put her out of competition for a full year.

That was the darkest time so far of Zoe’s sporting career, as it took a long time and a lot of hard work to try to regain her previous level of fitness and ability. She had to follow a strict rehabilitation and physiotherapy regime before she was able to lift weights again. Slowly though, she regained her strength and she has since taken part in the following events:

Of course we’re all now really hoping she’ll be in the running for selection for this year’s Olympic Games in Tokyo – watch this space!

What do you personally feel your biggest achievement is?

From a sporting perspective Zoe has previously told me that she finds it hard to choose between competing at the London Olympic Games and winning Gold at the Glasgow Commonwealth Games as her biggest achievement. Both events were so good to take part in because of the added excitement of a home crowd to cheer her on. On a personal level though, I know she feels her biggest achievement has to be getting through the dark times following her injury to get back to where she’s at today. 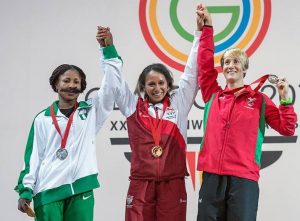 Zoe receiving a Gold medal at the Commonwealth Games in Glasgow, Scotland

It’s safe to say you have achieved a lot already, but do you have any future ambitions?

Zoe still has so many future ambitions! She’s still relatively young at 25, even though she’s been competing internationally for 13 years and had so many amazing opportunities to travel the world. In the short term she hopes to compete at this year’s Tokyo Olympics, then the Birmingham Commonwealth Games in 2022 (that’ll be another amazing home crowd!) and the Paris Olympics in 2024, and everything that comes in between.

What is the best advice you would give to a young person today?

I would imagine that from her own experience perhaps the best advice she could give would be around not being afraid to try something new if you are offered the opportunity to learn. Nothing lost if whatever it is doesn’t work out but unless you try you’ll never know. Also when times get tough, keep going – don’t give up if you have setbacks along the way to what you want to achieve.