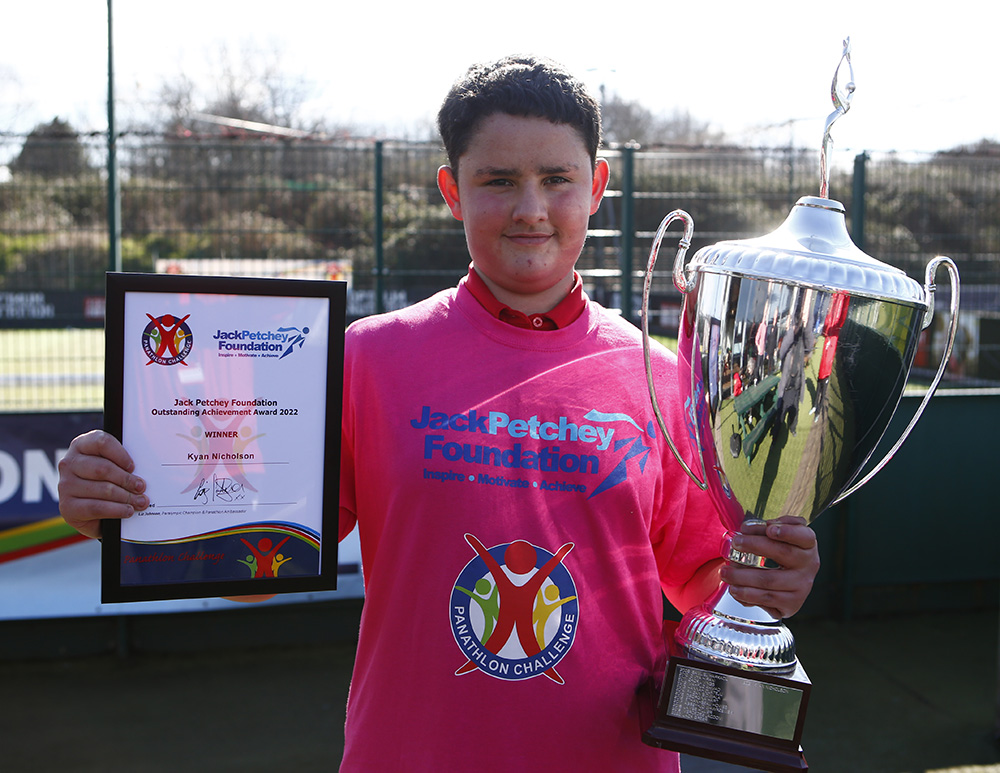 Read more about Kyan’s story below!

Kyan Nicholson said Panathlon had made him “a new person” after collecting our prestigious 2021 Jack Petchey Foundation Outstanding Achievement Award.

The awards, now in their 13th year, celebrate the most remarkable achievements of the thousands of competitors, Young Leaders and schools who take part in Panathlon across London and Essex.

Kyan, 14, attends Alexandra Park School in Haringey and has proved himself a role model and inspiring leader to the school’s younger Panathlon competitors, despite being diagnosed with several conditions which inhibit his learning.

He has autism and moderate learning difficulties which means he sometimes he finds academic work and regulating his behaviour difficult. The pandemic was a particularly tough time for Kyan as it disrupted the life structures that he was comfortable with.

Despite these challenges, Kyan has thrived when given leadership opportunities, particularly in guiding his younger peers in the Virtual Panathlon programme which Alexandra Park embraced wholeheartedly during the pandemic.

Kyan leads virtual boccia, new-age kurling and ten-pin bowling competitions at the school’s Wednesday afternoon SEND sport sessions. He also attended a summer sports camp at the school, which was based on the Virtual Panathlon blueprint.

“He arrived early every morning to help set up and his enthusiasm and energy throughout the day helped to create a really positive atmosphere for others,” said Alexandra Park’s specialist PE teacher Bren Amooty.

“It’s really lovely that the other children look up to Kyan and think, ‘I’d love to do that when I’m in Year 10.’ He sets such a lovely example and is so patient with them. He is very knowledgeable and they really appreciate him passing on his skills.”

Kyan is a qualified Boccia England umpire and has also earned awards in first aid, tennis and wheelchair slalom. “I really enjoy helping others. It makes me feel amazing,” he said.

Outside of school, he goes to a drama club and plays football, basketball and tennis. He was also recently part of Children in Need’s performing arts advert on TV.

Kyan was presented with his award and the prestigious Jack Petchey Foundation Outstanding Achievement trophy at the Panathlon North London Football Finals at Barnet Powerleague on Monday (March 7).

For a more images from Kyan’s presentation ceremony see our gallery here.

After being handed the trophy in front of his cheering Alexandra Park team-mates by Jack Petchey Foundation’s Head of Partnerships, Victoria Mirfin, Kyan said: “I wasn’t expecting that! My mum and dad will be amazed.

“Helping others really is my favourite thing. It’s made me a new person. My confidence has become much stronger. When I leave school is really want to be a sports coach.”

Kyan admits that his behaviour in the classroom can sometimes be “unreasonable” and that encountering similar behaviour from younger pupils with SEND while leading sport sessions has given him empathy and more understanding of his impact on others.

“Kyan is an absolute angel in my lessons but some of his teachers might not always get to see the best of him!” said Mr Amooty. “Myself and Kyan’s Head of Year wanted to reward him for the great effort he has put in to make better choices and share his love of sport by guiding the other pupils.

“When Kyan leads the Panathlon activities and other sports it’s lovely for me as a staff member to step back and watch him interact so well with a broad spectrum of students. He always makes sure they have a smile on their faces when they leave! We are so proud of him.”

“Despite some setbacks in his life, sport and sports leadership roles have increased his self-confidence and empathy. He has shown exceptional maturity in supporting younger students who have a range of additional needs and disabilities and we’re delighted that Panathlon has given him that platform.”

Panathlon Chief Operating Officer, Tony Waymouth, added: “Kyan has shown real maturity in leading Panathlon activity through the pandemic and has developed hugely as a person. We are proud of the progress he and his peers have made in tandem.”

Congratulations Kyan and a big well done, we’re super proud of you!!!

Are you a young person striving to make a difference for the environment, climate change and young people? We want to hear from you. Email pr@jackpetchey.org.uk for the opportunity to share your story and your achievements!