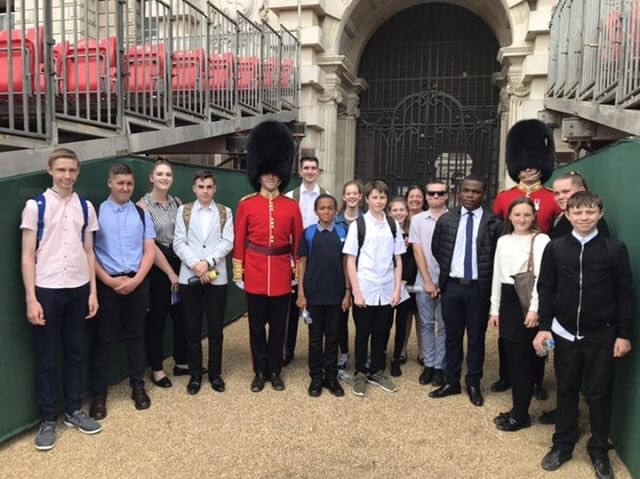 A few months ago 15 cadets from the 358 Welling Squadron Air Training Corps (ATC) aged between 12 and 19 had the privilege of attending the formal rehearsal for the Queen’s birthday, called ‘Trooping the Colour’. The majority of those in attendance had never been to an event like this before, and so it was a spectacular experience for them.

The cadets had the opportunity to see one of the greatest military spectacles that London provides. The 1400 guardsman, massed bands, Blues and Royals of the Household Cavalry and the King’s Troop of horse artillery put on a truly amazing display of military prowess.

On parade there were a number of black and ethnic minority guardsman and the cadets felt like that showed them that this country is slowly becoming more representative of the diverse heritage, culture and backgrounds of the people who live in the British Isles.

The cadets had views to Downing St, Whitehall and the Cenotaph, as well as the Houses of Parliament and Admiralty Arch. They were able to come into central London, without their parents and guardians and enjoy the event. This is something that they may not have otherwise experienced, teaching them independence and confidence. They experience also provided the opportunity for some of the older cadets to realise that a job in London is a viable prospect because of the ease of public transport travelling by train from Welling to London Charing Cross.

The event has inspired the young adults to be better cadets, whilst reinforcing their want to improve their drill and music skills.

Flight Sergeant Francis Bussey commented that: “The day was very enjoyable; it was a good social event to talk with some of the cadets and interesting to see how long parades are, and how well all the military personnel remembered all the movements. I felt that being British isn’t only waving a flag, but putting time and effort in celebrating things like this parade!”

Want to apply for an Educational Visit? Take a look at this page.