#CrystalAwards: Young people of Epping Forest have their voices heard at Youth Conference 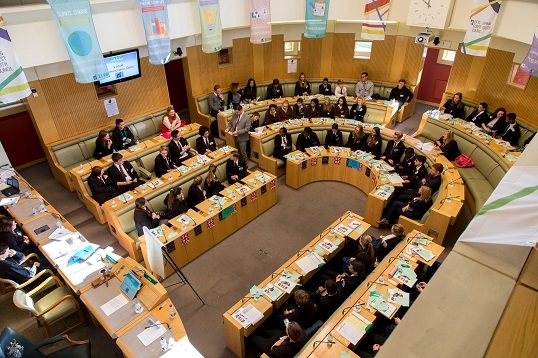 On 2nd October 2015, the Jack Petchey Foundation held the Crystal Awards at City Hall, London to mark the 15th anniversary of the Jack Petchey Foundation and the milestone of having invested £100m into youth projects in London and Essex. In a special gesture to mark the occasion, £225,000 of grant awards were given on the night to 150 youth groups specially selected for their outstanding work with young people.

Epping Forest Youth Council (EFYC)  are a local body of 22 democratically elected young people, who are 13-19 years old. The members of the Youth Council are non-party political, representing the voice of young people at a local level at public meetings and events.

EFYC used their £1500 Crystal Awards grant to hold a Youth Conference during Local Democracy week in October 2015. Ninety delegates attended the conference representing seven schools, two colleges and the home educated group. There were a variety of aims for the Youth Conference including, enabling the Youth Councillors to consult with their peers on relevant issues, to engage young people in local politics and to give local young people the opportunity to voice their opinions.

The Youth Councillors were in charge of planning the event, which gave them experience in event management, keeping a budget of expenditure, sourcing the merchandise for the event and making sure the invited schools attended. The Youth Councillors also received specialist training in debating skills, campaigning skills, and public speaking which enabled them to create their own workshops to deliver the delegates on the day of the conference.

The delegates all took part in the three workshops which included public speaking, debating skills and campaigning skills, which were facilitated by the Youth Councillors. The delegates then put their new skills to the test, with everyone taking part in a conference and debate about whether the United Kingdom should remain in the European Union. The delegates were split into two, with one half of the room asked to support the “Remain” argument and the other half to support the “Leave” argument, regardless of their own feelings on the matter, to allow an equal debate.

Everyone in attendance took part in the “Mark Your Mark” event, in which delegates were asked to select one issue that they would like the UK Youth parliament to campaign on. There were ten issues to choose from ranging from the living wage to tackling racism. The results were taken into consideration along with the rest of the country’s young people who took part, making sure that their voices were heard.

The Youth Conference was a great success, with everyone leaving having learnt new skills and heard new insights on the issues that affect young people today. The majority of the pupils who took part said that the debate was the highlight of the day, as they were able to take part, listen to other peoples’ views and get their point of view across.