Michael Akinyemi from St Benedict’s Catholic College, captivated an audience of more than 500 at Covent Garden’s Cambridge Theatre on Monday 18th July, earning him the title of Grand Champion winner of Jack Petchey’s “Speak Out” Challenge! 2022 with his speech about Nigerian heritage.

With over 27,000 Year 10 students (14-15 year olds) in London and Essex state schools taking part this academic year alone, Jack Petchey’s Speak Out Challenge is the largest youth speaking competition in the world.

Using his natural charm and crafted storytelling, Michael entertained the judges and audience while sharing some personally observed truths; “Those who came before me were just as strong mentally as they were physically, my ancestors. 400 years later my father comes to England, a fighter…carrying resilience in his left hand and courage in his right.”

Michael will receive £2,000 for himself and £3,000 for his school, St Benedict’s Catholic College to be spent on a project of his choice.

Before receiving the title, Michael explained why he chose to speak out about this topic; “There are two reasons. One – because my heritage is very important to me, and I wouldn’t have talked about anything else. The second reason – because of stigmas about immigration. I talk about my father in my speech as an immigrant to shed some light why people immigrate. It’s not like he couldn’t have lived a good life in Nigeria. He graduated from university, was earning decent money. But he knew that he was destined for more than “decent”. Immigrants don’t leave their entire lives behind to come and steal people’s jobs in England.”

After being crowned Grand Champion, Michael said; “Looking back from when I first did the workshop, they told me I had to do a speech three minutes long, I didn’t even think it was possible. To stand up there (on stage) with 14 of the best speakers that I had ever met, there are no words to describe it, It’s been amazing, it’s been amazing. Hopefully I’ll get to come back here and judge, I’ve fallen in love with the competition and all of the speeches I have heard. I might explore public speaking.”

The Grand Final judging panel who declared Michael the winner comprised a mix of award-winning journalists, high-profile business people and celebrities, all known for using their voice to make a change:

Izzy shares her personal experience of her tic disorder. She explains “I refuse to let something as simple as a tic disorder get in the way of my life, because tics aren’t always Tourette’s, they’re not a social video to be laughed at, they are a part of who I am.”

At the end of the event Izzy said “I am very glad to have taken part in Speak Out Challenge, to come second and to show my personal development.  To be able to stand on stage and give a speech on something as personal as tic is fantastic.”

Grace said “It’s absolutely amazing! I never thought anything like that would ever happen, it’s so surreal! It’s taught me so much about confidence, getting up in front of people and not being afraid to use my voice. A workshop at school has turned into being on a huge stage on the West End, it’s absolutely astounding.”

Fourth place was awarded to Maya Redley from Leytonstone School in East London.

Maya’s speech questions beauty standards set out in films for her childhood.

Maya said “Standing here 4th out of 27,000 is insane and to be given this opportunity to share what I had to say and to have people actually listen to me is so special. It’s given me confidence, Now going into things I don’t second guess myself as much and it’s shown me that I can do it, if I put my mind to it, I can do anything!”

Tim Campbell MBE, Director said “I’m so proud to be supporting an organisation that helps young people speak out for what they stand for. It’s so hard to judge – they are all so amazing!”

Candice Brown, Best selling author and Sunday Times Columnist said “I am beyond blown away!”

Susan Acland-Hood, Permanent Secretary, Department for Education said “Astonishing talent and skill on display from all 15 of the young finalists – an almost impossible judging job, but what a privilege.”

Kaylee Golding, Radio Presenter and DJ said “I am so inspired by the incredible young talent! So much though provoking content. It makes me so hopeful for the future!”

Mayumi Staunton, Jack Petchey’s “Speak Out” Challenge! Champion 2020-21 said “Every speaker has done something incredible by stepping on this stage. They have impacted everyone in the audience and I hope they’re exceptionally proud of themselves for their courage and eloquence.” 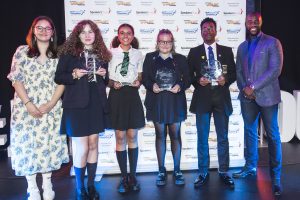 Jack Petchey’s “Speak Out” Challenge! is designed and delivered by Speakers Trust and is funded and supported by the Jack Petchey Foundation to encourage 14 and 15 year-olds to develop public speaking and communication skills as well as building self-esteem and confidence. Now in its 17th year, over 27,000 young people in 419 state schools across 37 regions throughout London and Essex took part in this year’s Challenge.

Victoria Mirfin, Director of Programmes and Partnerships at the Jack Petchey Foundation, said: “It’s been so inspiring to watch these young people who have come so far in this past year to perform live on stage in front of hundreds of people. Jack Petchey’s “Speak Out” Challenge! is all about giving young people the tools and confidence to be able to shape a positive future, and give them the platform to share what this might look like. Each and every one of them should be so proud of what they have achieved tonight and we can’t wait to hear what their future holds.”

Find out more about Jack Petchey’s Speak Out Challenge here, and how your school can get involve!