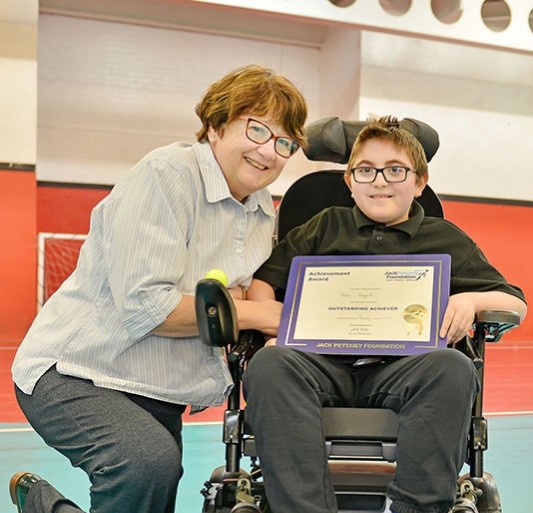 The Jack Petchey Foundation has supported the Greenwich Powerchair Football Club through the South London Special League since 2007. The South London Special League has received over £62,800 of funding since then, helping to support young people through disability sport. In Adam’s story, we can see how taking part in team sports dramatically improves the lives of young people, by keeping them active and improving their self-confidence.

Adam is a 13-year-old boy who started attending training sessions at Greenwich Powerchair Football Club in April 2016. He has a disability called Duchenne Muscular Dystrophy as well as autism, attention deficit hyperactivity disorder and oppositional defiant disorder. Before he joined the Greenwich Powerchair Football Club, he had no social life outside of his family.

Adam attends a mainstream school where he is the only wheelchair user; staff assist him throughout the day so he has little to no independence day-to-day. Although he is in a mainstream school he didn’t feel as if he fitted in and at the end of each day, Adam would go home and play videogames in his room with little to say about his day at school.

However, that all changed when Adam joined the Greenwich Powerchair Football Club. Although he was very nervous at first, as this was the first physical activity he had ever been able to participate in, he was ecstatic at meeting other young people with similar disabilities to him. Adam is now a valued member of Greenwich Powerchair Football Club and his peers say that “it feels like he has always been here”. He is now just as confident as the other members to ask questions, try new things and communicate with the group.

Throughout the past year Adam has improved in all aspects of his life, from communication skills to his academic achievements. At school, Adam used to be very isolated and would rush his school dinner before hiding in the special needs learning centre because of his low self-esteem. As his confidence has grown, so has his communication skills and he enjoys a much more active social life at school- he also holds the school record for bottle flipping which always pulls a crowd! This is something his parents could only have dreamt of a year ago.

Adam’s mum said “During the time spent at powerchair football Adam’s social interaction and communication skills have improved so much, he is much calmer and talks more now than he ever did. It’s so lovely to hear Adam has a voice and participates with all the other team players.”

Now Adam feels that he finally belongs somewhere, valued and part of a team. When asked what being a part of the Greenwich Powerchair Football Club means to him, he said “I enjoy wheelchair football as I feel part of a team. I have gained confidence and a lot more independence since starting and have made friends. I would definitely recommend anyone to try wheelchair football, it is a lot of fun.”