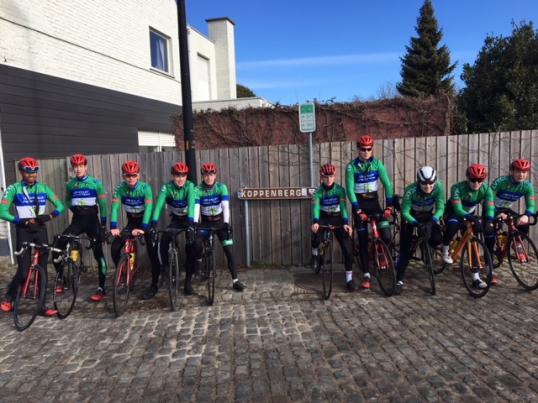 The Lee Valley Youth Cycling Club used their Leader Award Grant from the Jack Petchey Foundation to put towards a recent trip to Belgium. The Junior Team got the chance to ride some of the country’s best tracks as part of a training weekend ahead of an international cycling race.

The Junior Team at Lee Valley Youth Cycling Club were invited by UCI (Union Cycliste Internationale) a world cycling governing body to compete in this year’s race in Damme, Belgium. To get the chance to compete in this race is a prestigious honour as it is not open for applications, rather groups are particularly chosen by the body.

Ahead of the race, the group, who train in Redbridge, wanted to practice on the Belgium tracks, so they could become more comfortable on these new routes. Therefore, they used the funding from the Foundation to put towards a training weekend for the group two weeks before the big race. They travelled to Belgium on the morning of 3rd March and headed to Lierde for a road race on Belgium roads. Considering they had never raced on these routes before, they did exceptionally well and two riders managed to finish in the top ten!

They then stayed overnight before cycling from Oudenaarde to Damme on 4th March. This route included climbs of the classic Koppenberg, which is extremely steep and cobbled. It is part of the Tour of Flanders, a race that was first held in 1913 and is well known among cyclists for being steeped in history. By ending up in Damme, the group were able to familiarise themselves with parts of the route for the UCI race, two weeks after.

Being able to experience Belgium road racing first-hand was an invaluable experience for the young cyclists as many of them had not cycled much outside of the UK. The road racing that they completed in Belgium is also much more like the racing professional cyclists do, as opposed to the circuit racing they do at home. The young cyclists interested in forming a career in the sport now have experience they can develop on.

Also, being able to visit somewhere that is so rich in cycling history was incredibly inspiring for the young people. To cycle on the climb of the Tour of Flanders to a cyclist is like being able to play at Wembley Stadium for a football player or running on the Olympic Stadium’s track for an athlete. One of the cyclists had never been outside of the UK before, so this trip was an especially brilliant opportunity for him to experience something completely new.

The most important aspect of the trip was that the young cyclists got the chance to ride parts of the route of the UCI race in advance of the competition just two weeks before they would take part. This gave them the opportunity to get to know the route and prepare themselves for what to expect. Overall, it opened their eyes to the vast world of cycling and has inspired them to explore the sport further.