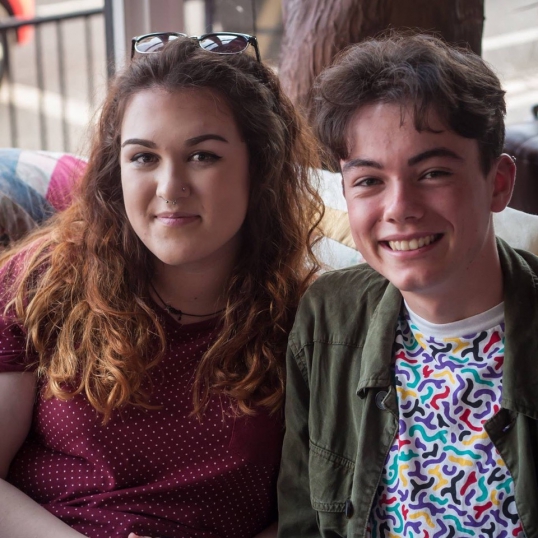 Two sixth form students from Southend High School for Girls received Achievement Awards from the Jack Petchey Foundation in recognition of their hard work in raising awareness for the local LGBTQ+ community. The students worked hard to create a LGBTQ+ society at their school, they also helped to raise awareness in the wider community by supporting other schools and got involved in various community-wide LGBTQ+ projects too.

While at sixth form, Joe and Jordan were approached by younger students who asked for there to be a club that supports LGBTQ+ students. The students then took the initiative to create a group within their school, which focused on raising awareness for the LGBTQ+ society and educating fellow classmates on the issues that those in the LGBTQ+ community face. Joe Nicholls said about the group at school: “we were inspired to bring together the LGBTQ+ community in the school and provide safe and educational spaces for everyone to express themselves and learn more about the community they belonged to.”

As part of this initiative, they also worked closely with the school’s teachers to guide them on how best to support any students in their class who fall under the LGBTQ+ categories. Under their leadership, this society was able to grow and grow and it had a positive impact on the school, helping many of its students.

The group would meet every week and often they would invite guest speakers to come in and speak with the members, to help inspire and educate. For example, local transgender activist and former policewoman for the Metropolitan police, Gina Denham came in and spoke to the students about her experiences and offered advice. Joe and Jordan both went on to join her local group, Transpire, which offers support for the LGBTQ+ community – they’re planning to march at London Pride with the group this summer!

After establishing a successful group at Southend High School for Girls, the students were inspired to take this work further afield and help people outside of their school. They wanted students across the local community to have access to a similar group, so they decided to work with other schools to help them set up their own LGBTQ+ societies.

They also extended their work outside of schools, into the community as a whole and helped to raise awareness of the LGBTQ+ society around their local town of Southend. After joining Transpire, they both met many other people from the LGTBTQ+ community, including members of the local council. This hard work was then recognised by local MP James Dudderidge, who asked them to meet and discuss the challenges of being an LGBTQ+ student, with the aim of him then presenting this at a Local Government meeting.

The students, who were in upper sixth when the society was first founded, have since left the school. However, their hard work has left a lasting impact both on their own school and their local community as a whole and it will continue to inspire students for years to come. The pair also decided to spend their £250 grants from the Jack Petchey Foundation on equipment for the school, including many LGBTQ+ resources for Southend High School for Girls’ library, which will continue to educate the younger years.